Risky business (and what’s next for the Grand Bargain) 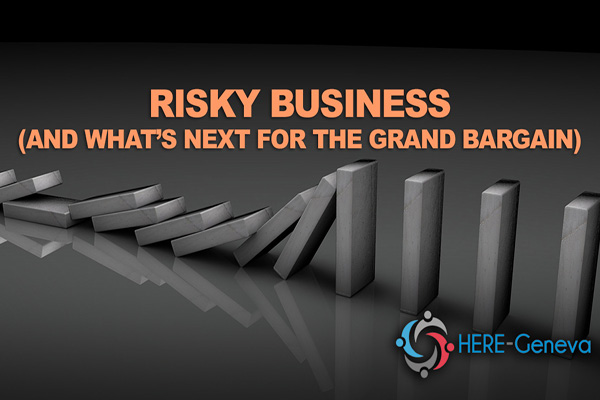 As 30-odd political and humanitarian leaders lined up for the photo op to mark the signing of the Grand Bargain at the May 2016 World Humanitarian Summit in Istanbul, few were openly questioning the US$1billion efficiency programme promised by the High-Level Panel on Humanitarian Financing a few months earlier. More than four years later, the number of signatories of this humanitarian quid pro quo has doubled, yet little more has been heard on the US$1bn saving. And a number of those working in aid agencies are discretely wondering whether their investment (the favour bestowed on donors) will ever show a return.

Much of this boils down to risk. Risk is inherent in the environments in which humanitarian action takes place. COVID-19 has been a risk compounder as new risks related to duty of care, supply chains, and in cash delivery, etc. have been added to those already impacting crises. The trend for at least two decades has been for donors (including several international agencies acting as donors) to transfer liability down the chain of operations to those at the end of it: often local actors. And, despite the drive for a more collective approach promised by the Grand Bargain, this persists: most notably when agencies are made liable to pay back funds to the donors for goods that are looted.

The transfer of risk by the donors to agencies has been facilitated primarily through a plethora of ever-increasing due diligence measures and regulations. Donors have insisted that agencies bring their house in order to manage a wide variety of risks, including the prevention of sexual exploitation and abuse, fraud and corruption, violence and crime and many others. The last thing a donor wants is for its image to be tainted because its money has been implicated in unethical or criminal activity, particularly at a time when right-wing media groups are putting pressure on overseas aid. Though necessary, the reporting of systematic corruption and fraud in the DRC by The New Humanitarian earlier this month will likely result in even more compliance measures and ever stricter rules.

To be sure, fiduciary and safety risks can and must be mitigated through a model with rules and compliance at its heart. But the intolerance of any form of risk in humanitarian action is simply not an option: for a start, people in highly insecure war zones would immediately be left behind. Indeed, donors and agencies have a responsibility to share and collectively manage a certain degree of risk.

But there is some good news. Spearheaded by the Netherlands Ministry of Foreign Affairs and the ICRC, the agenda for the upcoming meeting of the Grand Bargain signatories later this week includes an item on risk sharing. This is an area in urgent need of attention, and several proposals seek to address it. One suggestion put forward is for senior donor representatives and leaders of aid agencies to jointly sensitise those arms of government responsible for the due diligence requirements and compliance measures on the specificities of humanitarian action. Harmonising donors’ due diligence requirements using existing humanitarian standards is another idea worth exploring. And putting a realistic price on risk to share the costs holds promise too.

If the Grand Bargain is to take on risk sharing as a key commitment, the platform requires a broader and deeper perspective than its initial focus of efficiency. Although the chapeau’s drafters included the caveat, “[T]he Grand Bargain is not a panacea for all the problems in the humanitarian ecosystem,” it was naïve to imagine that fundamental change could have been achieved without addressing the sector’s vested interests and power imbalances. An equal voice at the Grand Bargain table may suggest a level playing field, but it should not be confused with the significant differences in size, capacities, and institutional backgrounds of the Grand Bargain signatories. The Center for Global Development noted that the majority (74%) of the recent global appeal for the COVID-19 pandemic response found its way to UN agencies, which they say slows down the response. Systemic problems continue to exist.

Moreover, while the Grand Bargain covers a range of subjects that matter, few involved seem to realise that it hardly speaks to effectiveness and quality. One explanation for this glaring gap is the ‘Christmas tree model’ that appears to have been deployed at the time of drafting in early 2016: more and more was added to the draft text, often on the advice of those who had the loudest voices in the (humanitarian) family, resulting in more than 50 commitments decorating the endeavour. The beauty of the tree is not up for discussion, but in the superfluity of commitments some essential ones were edged out. As ICVA wrote two years ago, since the first negotiations of the Grand Bargain, NGOs have warned that it needs to include commitments that address risk.

Given the upcoming meeting of signatories will discuss the Grand Bargain’s future, there is room for a revamp. Essentially, the agreement between donors and agencies must cover the key aspects of good humanitarian partnership starting with principles and ethics. For such a dialogue to take place, the fundamental issue of trust needs to be addressed as a matter of priority. Trust speaks to the quality of the relationship between donors and humanitarian organisations, and it calls for a transparent and honest dialogue. Donors and agencies, large and small, must not shy away from sharing lessons on the challenges of delivering high quality, accountable, and effective aid.

Continued senior and political engagement is needed too. Except for the position of the Eminent Person, currently held by the Dutch Minister for Foreign Trade and Development Cooperation, Sigrid Kaag, their support for the Grand Bargain has been found wanting. Kaag, who is well-versed in the UN system, has given the agreement clout and direction, and will be much missed when she steps down to lead her party at the March 2021 Dutch general election. Her legacy at the Grand Bargain would be cemented were she to fully realise the deal’s quid pro quo. Indeed, risk sharing provides the perfect opportunity for the investment made by aid agencies to start showing a return.

This website uses cookies to improve your experience while you navigate through the website. Out of these, the cookies that are categorized as necessary are stored on your browser as they are essential for the working of basic functionalities of the website. We also use third-party cookies that help us analyze and understand how you use this website. These cookies will be stored in your browser only with your consent. You also have the option to opt-out of these cookies. But opting out of some of these cookies may affect your browsing experience.
Necessary Always Enabled

Any cookies that may not be particularly necessary for the website to function and is used specifically to collect user personal data via analytics, ads, other embedded contents are termed as non-necessary cookies. It is mandatory to procure user consent prior to running these cookies on your website.