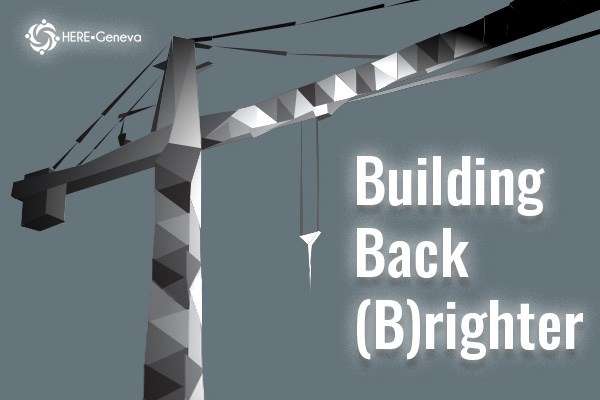 The title of US President-elect Joe Biden’s transition website will not be lost on those working in the humanitarian and development spheres: ‘build back better’ has long been in circulation. Used during the recovery phases of the 2004 Indian Ocean tsunami and the 2010 Haiti earthquake responses, the term has experienced a resurgence of late among a variety of institutions and governments in the context of planning for the post-COVID-19 world. But quite what building back better entails is a question perhaps best answered by survivors of previous catastrophes. For only they can have any real perspective on how to ensure crisis-affected people will emerge, their situation somehow improved.

COVID-19, though unusual in scale, is not unique in character: crises have a habit of revealing ingrained social inequity. And whether it’s access to healthcare – and to emerging vaccines – work opportunities, or education (to name but a few of the most obvious examples), “Inequality defines our time,” as the UN Secretary-General succinctly put it. For those operating in the humanitarian space, this lesson is well-known: the people most affected by war or disaster are, generally speaking, those without the means to avoid it. By virtue of the principle of impartiality, humanitarian response should prioritise these people, no matter who they are, and no matter where they may be. But there is another lesson – one to which humanitarians have habitually been less receptive: inequality is often correlative with ethnicity, gender, age and other attributes of marginalisation – and, as such, requires a deeper understanding of context and a more nuanced response to remedy. Given their limited mandate, what can, or should, humanitarians do?

At the heart of this conundrum is rights. In the late nineties, through a slew of new initiatives such as the Sphere Project, humanitarian action was re-conceived. Gone were the acts of charity, and in their place were positioned approaches in which human rights were central. Yet, twenty years later, rights-based approaches seem to have disappeared from the lexicon, crowded out by more recent linguistic and conceptual innovations. Few if any of the current policies and publications produced by humanitarian coordination and inter-agency bodies contain any trace of human rights.

Let me provide some evidence.

First: the latest (2020) edition of the Humanitarian Accountability Report (HAR), which reviews the implementation of the Core Humanitarian Standard (CHS), provides a sense of how organisations are meeting their commitments to people affected by crisis – or so one would think. But the rights focus of CHS commitment four (“affected people know their rights”) has disappeared into oblivion. The HAR doesn’t mention it; and, importantly, there’s no indicator to measure it. As a core standard for the humanitarian sector, shouldn’t we be concerned that we’re neglecting the rights of the people we work for?

Second: in the humanitarian localisation bandwagon, which, understandably, has gained significant traction during the pandemic response, the language of rights is surprisingly sparce. Yet the ability of local civil and grassroots organisations to grow and lead the delivery of impartial humanitarian aid will, to a large extent, depend on freedom of speech, the right of assembly, and freedom of association: rights and freedoms that are increasingly at stake in an era when governments clamp down on such rights under claims of counter-terrorism. It’s a mystery why the loudest localisation loyalists have dropped the language of rights in the context of humanitarian action: in the late nineties, many were fervently promoting the rights-based approach as the future.

HERE’s research illustrates that those agencies that consider themselves multi-mandated do not differentiate between the rationales for their humanitarian and development interventions. What should be different, however, is the mode of action, which requires making choices. To be sure, humanitarians identify victims of sexual violence and provide them with medical care, psycho-social support, and so on. Those working on development (should) help survivors realise their rights and receive compensation and should work to revoke any impunity given to perpetrators of such violence. Tensions emerge when perpetrators are in positions of power, when they, for example, form part of a country’s national armed forces and when rights advocacy is sacrificed to avoid jeopardising economic gains or peace negotiations (as though it were possible to forge a sustainable peace without rights for all) or, simply, through self-interest.

Indeed, if there’s one area that has made little international progress in recent years, it’s human rights. Populism, protectionism, and nationalism have all pushed back on the global liberal agenda. At the supranational level, the UN Human Rights Council has reached the same level of gridlocked politicisation as its predecessor, the Commission. That the October elections to the Council extended membership to states actively working against the human rights agenda will only shore up divisions, further erode trust and reduce the likelihood that negotiations in this body will produce anything meaningful. From a humanitarian perspective, there is the ever-present tension between human rights advocacy and humanitarian access, as though access should be achieved at all costs. More worrying still is the perceived relationship between human rights and Western imperialism, with some seeing the human rights agenda as a neo-colonial enterprise.

In this context, building back better, when not anchored in a human rights framework, is entirely hollow. And it’s, therefore, truly astonishing to see how humanitarians have abandoned the rights-based approach so easily. Indeed, building back better requires that we build back (b)righter – putting rights back at the centre of humanitarian action. Only when we address inequalities at the outset of a response can we hope to make any improvement on what came before.

NextVacancy: someone to shake up humanitarian coordination