Vacancy: someone to shake up humanitarian coordination 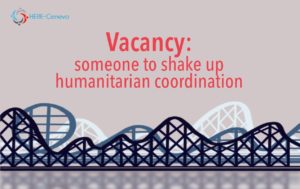 When he started in his new job as UN Under-Secretary-General for Humanitarian Affairs and Emergency Relief Coordinator (USG/ERC) in the spring of 2015, Stephen O’Brien was given the daunting task of making the first-ever World Humanitarian Summit (WHS), scheduled for the following year, a success. Admittedly, a substantial part of the failure of the WHS was beyond his command. The agenda became a shopping list; the number of commitments spiralled out of control; and the financing gap has only grown since the Istanbul summit. The shrinking of needs is easier said than done. But whether O’Brien should have resisted using the WHS as a platform to discuss the humanitarian system’s coordination architecture is another matter.

Coordination of the humanitarian system remains a UN prerogative. While member states have a say both formally and informally, the UN Secretary General (UNSG) designs and draws the boundaries of this construct. This year marks the 30th anniversary of UN General Assembly Resolution 46/182, which established the role of the USG/ERC, and created the Department for Humanitarian Affairs – succeeded by OCHA in 1998 – and the Inter-Agency Standing Committee (IASC), which allows OCHA to discharge its coordination mandate. Various USG/ERCs have made their mark: the late Sérgio Vieira de Mello had the confidence of all in the system, not least because he came from an operational agency, UNHCR. Jan Egeland introduced the cluster approach, initially to address the gap in the system’s response to situations concerning IDPs, but which then became the default humanitarian coordination arrangement. And Valerie Amos drove efforts to strengthen accountability for agencies’ performance. The legacies of others, not to mention their names, have quickly been forgotten. In the past few days, Mark Lowcock announced his resignation. Time will tell how he will be remembered.

Reminiscent of O’Brien’s reluctance, Lowcock did not demonstrate a great appetite for, as Mukesh Kapila put it, “a freshening-up of the UN’s humanitarian operating model“. Having been evaluated twice in the five years since it was first established in 2005, the cluster approach did not edge its way into the next decade with flying colours. Still, it was perceived as a good enough way forward for humanitarian coordination. Best practice would have been to continue to review its progress, and the owner of the cluster approach – the IASC – made a recommendation to do so. But this was not something its chair, the USG/ERC, saw fit to act upon – and so the cluster approach grinds on without any significant recent evaluation of its impact on the coverage and quality of the delivery of services.

Given humanitarian coordination is the USG/ERC’s mandate, whoever takes the helm at OCHA must have a vision for the future direction of travel, also as OCHA will soon be in need of a new strategy for the coming years. And it needs to be a direction that involves more than simply rearranging the deck chairs on the Titanic. The basic promise of humanitarian coordination – that gaps in responses will be identified and agencies will be held accountable for these gaps – has hardly been fulfilled. Accountability remains the weakest link. Which Humanitarian Coordinator (HC) has told a UN agency that it should step aside because it is not delivering? Who decides eventually on the priorities of what services should be delivered first? Many humanitarian response plans look still a lot like the stapled plans of various agencies sold as strategic and collective goals. In practice, donor governments’ funding decisions impact highly on the priorities, but asking donors for their preferences when they provide unearmarked funds, as reportedly happened in the context of the Global COVID-19 appeal, would be the wrong way around.

Part of the conundrum of humanitarian coordination is the confusion between a UNHCR-led refugee response and the HC/OCHA-coordinated clusters, especially in situations that concern both refugees and IDPs – many of which happen to be among the worst crises on the planet. Progress on this matter has stalled. In too many refugee responses, UNHCR has yet to adopt a different, collaborative attitude beyond the level of mere intention. For IDPs, the response also remains fraught with issues, as UN agencies continue to hesitate to take on assertive governments that refuse to become part of the solution. Reportedly, the UNSG’s High-Level Panel on Internal Displacement – established to examine how the system addresses IDPs – also refused to make the humanitarian architecture part of its discussions. All of this calls for a USG/ERC who is not afraid of taking bold steps and instigating change.

The selection of the new USG/ERC falls to the UNSG, António Guterres. In the past, when he applied to become the UN High Commissioner for Refugees, he demonstrated a strong interest in a transparent and open recruitment process. It would be a step in the right direction if, this time, the job would go beyond the usual horse-trading among the five permanent members of the Security Council and that nationals from countries other than the UK be invited to apply. The panel that will help Guterres select the new USG/ERC would also be well-advised to ask the candidates about their views on humanitarian coordination and how they would apply lessons from the past. After all, those who do not learn from such mistakes are only doomed to repeat them.

NextMeeting needs, needs meetings – but how many?