Meeting needs, needs meetings – but how many? 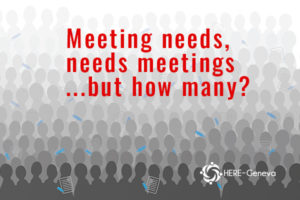 Years ago, when OCHA needed a tagline, its staff engaged in an email exchange on ideas for a new marketing catchphrase. Though the cluster approach – the mainstream humanitarian coordination model – was still in its infancy, the excessive number of meetings that came with it were already the focus of a resilient critique. The suggestion “Meeting needs, needs meetings” was, therefore, an apt one.

Ever since the cluster approach was introduced in 2005, tools and templates have dictated the process. More than a decade later, process still abounds in the clusters. Those leading the clusters express their frustration only behind closed doors. As one recently put it: “we spend four months of the year preparing for the humanitarian needs overview and response plan, four months carrying it out, and then another four months recovering before we have to start all over again.”

More often than not, cluster meetings are tick-box exercises, undertaken for their own sake, with participants providing information (often already in the public domain), instead of deciding on actions following a shared analysis.

Firstly, assuming that everyone present at the humanitarian coordination table is there for the same reason is a mistake. Several may be present to agree on common plans and outcomes. Others participate to hear what colleagues are doing and point them to remaining unmet needs. Increasing numbers of national and local NGOs attend the clusters to access funding, through opportunities such as the country-based pooled funds. Amid such a diversity of interests and expectations, agreeing priorities and setting a direction is not easily done.

Secondly, completing templates and other coordination processes have become an end in themselves. They have gone at the expense of leadership providing vision and direction. It’s telling that the cluster rulebook contains scant guidance on shared or co-leadership (for example, between a UN agency and NGO), standing in sharp contrast to the importance such leadership arrangements are given, especially by civil society.

Thirdly, coordination mechanisms, such as the Inter-Agency Standing Committee (IASC) at the global level or the Humanitarian Country Team at the level of the response, frequently ignore the foundations of humanitarian action: the humanitarian principles. In light of manifold approaches and priorities, the assertion that all humanitarian actors follow a principled approach needs to be challenged. While a collective forum would be the perfect arena in which to discuss compromises that have been made, such discussions are extremely rare. OCHA needs to step up to the plate and instigate the debate.

Fourthly, gaps at the regional level remain considerable. With the IASC continuously struggling to decide who to include and exclude from its global forum, it is high time to consider (strengthening) regional inter-agency bodies so that they are not simply an extra bureaucratic layer, but one where real authority sits. Major opportunities exist within regional bodies such as ASEAN or the AU, which play increasingly active political roles. A parallel move has already taken place in a range of UN and other organisations: under the twin pressures of the localisation agenda and reducing HQ costs, a number have (further) decentralised their staffing structures. Decision-making closer to or in affected regions makes a huge amount of sense.

In HERE’s research into the gap between policy and practice, we are increasingly detecting a disconnect between the working level and political leadership in the humanitarian system. In essence, what we see is this: the political leadership is increasingly risk averse and refuses to take a stance. By way of example, one can point to the fact that inclusion has come to replace protection in the UNHCR lexicon, almost without comment. Meanwhile, the working level is absorbed – if not obsessed – by technocracy, thinking the solution to all problems lies in ever more sophisticated dashboards and gadgets, such as the new Joint Intersectoral Analysis Framework – which appears to have been built in the (misplaced) belief that incentives for agencies to undertake their own assessments and appeals can be so easily diminished.

More importantly, perhaps, is the fact that – in plain sight – the word ‘strategic’, such a critical connector of the political and working levels, has been emptied of meaning. From a humanitarian point of view, for a country response strategy to be relevant, it must also include scenarios that see a worsening of conflict. Such scenarios are not unwarranted, as the past 12 months in Afghanistan, Ethiopia, Myanmar, and Mozambique can attest. Yet, what’s surprising is how many agency or collective ‘strategic’ plans confidently state that conditions for the delivery of humanitarian assistance will undoubtedly improve. Too often strategic plans are a sales pitch rather than anything meaningfully strategic.

There’s an urgent need to bring ambition back in line with reality. Ambitions reflected in (collective) commitments look increasingly hollow when, 15 years after the introduction of the cluster system, UN agency cluster leads need to continually be reminded that prioritising collective, rather than individual agency, progress is likely to yield significantly greater results. That a key tenet of the clusters – the concept of the provider of last resort – exists only on paper while some in coordination positions maintain a rigorous belief that accountability in inter-agency settings is working well merely demonstrates how immense the gap between policy and practice has grown.

Given that any humanitarian reform process is likely to be met with significant – and understandable – fatigue, a better investment would be to see how discussions in existing fora could be made more meaningful, and frank. After all, meeting needs, needs honesty.

PrevPreviousVacancy: someone to shake up humanitarian coordination