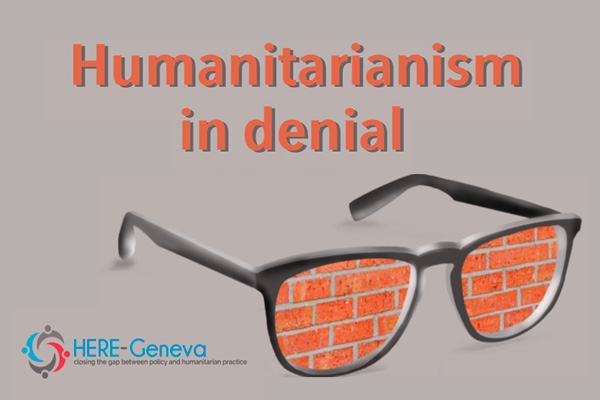 Other than being islands, Manus, Bhasan Char, and Lesbos have something else in common: they are the Alcatraz of our age. But rather than housing notorious bank robbers and those convicted of high-profile homicide, these prisoner islands contain refugees and migrants fleeing war-torn societies and economic collapse. These islands serve as a convenient human storage facility for governments who deny these people their fundamental rights – most visibly, their right to freedom of movement. As a Member of the European Parliament recently said: “The European policy for those in [what used to be] Camp Mória on Lesbos is not failing, it is the policy.”

And yet, while the memories of the fires in the Mória Refugee Camp are still fresh, the mainstream humanitarian discourse continues on its tracks undeterred, discussing at length, and often without context, localisation, accountability to affected people, and the double, triple, quadruple (innumerable?) nexus. It’s as though those humanitarian situations that rub up against the rough edge of donor politics do not exist (Out of interest, has anyone actually worked on accountability to affected populations in the Mória Refugee Camp or in other places of detention? Anyone?).

In this geopolitical exercise in human containment, humanitarian organisations become easily instrumentalised. As HERE has seen in places such as Myanmar, humanitarian organisations have the tendency to shy away from the core humanitarian question: how to work in situations where governments violate basic rights without, in fact, legitimising such practices? In Lesbos, many of the refugees have significant mental health problems; cases of sexual and gender-based violence (SGBV) among the most vulnerable are sky-rocketing. But how to address these issues while keeping detached from those authorities violating human rights? The dilemma of the instrumentalisation of humanitarian aid is not new, but this does not make it any less crucial – on the contrary. How can the sector’s internal debates be anything but superficial if this critical, basic issue continues to be ignored?

From the perspective of the recent (and renewed) debates on the aid sector’s racist and neo-colonial tendencies, the need for introspection and diversity inclusion is great. But introspection has its limits. We now work in a sector that has become so self-absorbed that it considers the prevention of sexual abuse and exploitation (by aid workers) as a priority of the protection agenda, and one of its key benchmarks of success. Yet the rights of crisis-affected people are being trampled beyond the humanitarian bubble. These rights are not negotiable: if we ignore them, we risk invalidating the humanitarian enterprise altogether.

The dominance of the localisation and humanitarian-development (-and peace) nexus in humanitarian discourse is unhelpful not only because it’s divorced from reality, such as that which plagues those detained on Lesbos, but also because the discussions have become so dogmatic they overlook opportunity.

In terms of localisation, there is no question that local human rights defenders and civil society groups are critical protection actors. Yet, the humanitarian and human rights worlds appear as divided as ever. Instead of exclusively focusing on the transfer of resources, the debate should shift towards complementarity in terms of what international and local actors can each bring to bear in holding rights offenders to account. Likewise, the nexus has entirely ignored the opportunity to leverage development in order to open the humanitarian space and improve human rights. When economic benefits are involved, (bilateral) development aid becomes a race to the bottom. The search for a nexus should open a path towards durable solutions. Yet without a rights agenda underpinning the process, efforts towards development and peace are doomed to fail.

The COVID-19 pandemic is unlikely to have a healthy impact on the future humanitarian agenda. Indeed, the UN humanitarian chief, Mark Lowcock, recently noted that the greatest challenge the sector will face in the coming years will be funding. The reduction in resources caused by the looming global recession will force prioritisation. But quite what priority should prevail has become near impossible to untangle. WHO labels the needs arising from the pandemic a global health crisis, WFP a food insecurity crisis, FAO a livelihoods crises, UNICEF an education crisis, UNFPA a SGBV crisis, and UNHCR a crisis of closed borders. This is partly understandable. They are right to view the current climate through the lens of their agency’s mandate. But it entirely ignores the need for a collective approach greater than the sum of individual preferences. No one but donors can decide what’s most pressing, and they do so by voting with their wallets.

This, in turn, puts the question of what’s next for the dialogue between donors and humanitarian organisations back on the table. The fourth wave of humanitarian reform since the mid-1990s, the Grand Bargain, is reaching its date of expiry. It has made a contribution to localisation, accountability to affected populations, and the nexus, if only for these terms to have become standard policy-speak among the aid worker community. It is time, however, to move on from the narrow-minded goal of efficiency and take a serious look at the role of humanitarian actors in locations where humanitarian space is limited and human rights curtailed. As it happens, these are the locations where humanitarian response is needed the most. Rather than living in denial, the humanitarian sector needs to be open to the challenges and dilemmas of in working in these situations. And this would be a welcome, indeed necessary, foundation for a new dialogue on humanitarian effectiveness.

PrevPreviousRisky business (and what’s next for the Grand Bargain)